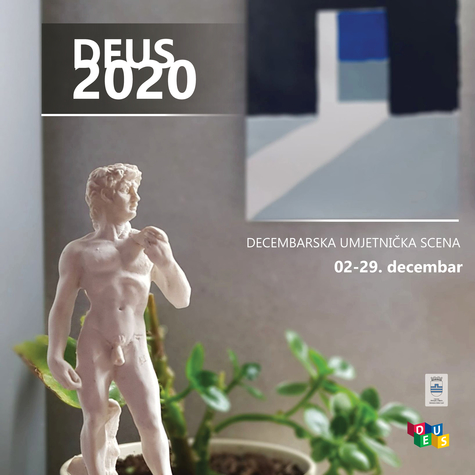 Despite the specific conditions of the production of cultural and artistic programs, during the difficult epidemiological situation, the Secretariat for Culture and Sports of the Capital is organizing the 28th edition of the December art scene DEUS this year as well.

Following the conceptual strategy of the event, within this year's edition of DEUS, we will present the art, literature, music and theater program to the Podgorica and wider audience.

All programs will be broadcast via the YouTube channel and social networks of the Secretariat for Culture and Sports - Podgorica, and will be implemented in real time, respecting the prescribed epidemiological measures.

We mark the opening of DEUS with an exhibition of political posters Pro et contra by the Slovenian group New Collectivism, created in the early 1980s, through a war poster of the 1990s and posters created in the previous two decades as critiques of neoliberal capitalism. The virtual tour is scheduled for December 2 at 7 p.m., and the same evening at 7.30 p.m. we will have a conversation with Miran Mohar, an active member of New Collectivism, Irwin and NSK. In addition to the exhibition of New Collectivism, the exhibition of Nenad Šoškić Transformation will be opened on December 15 in the Museums and Galleries of Podgorica.

The music segment of DEUS has an urban profile, so during December we will broadcast four concerts recorded at different locations in Podgorica, and broadcast live on the channels of the Secretariat. We promise a fusion of funk, jazz and experiment. The audience will be introduced to the bands Beatz n Rhymes (December 3 at 8 p.m.), Kuhinjazz add 2 (December 12 at 12 p.m.), The Gents (December 21 at 8 p.m.) and the premiere of the Trio Moa Faro (Dušanka Belada, Andrijana Ramović and Marija Mitrović , December 24 at 8 p.m.)

We have the honor to announce the premiere of the play Three Pigs by Stevan Koprivica, directed by Aleksandar Jovanović, on Wednesday, December 9 at 12 noon, Great Hall of KIC "Budo Tomović". This version of the fairy tale is based on the poetics of cartoons of the seventies of the last century, whose anthological heroes were Duško Dugouško, Patak Dača, Pera Kojot and company. A little bit of antiheroes, and a lot of sublimates of our flaws and virtues. This play, purposely written for the City Theater in coronary conditions, has ambitions to be fun, to make a question come out of fun, it is intended for little people from three years old and a little more than three, as well as their moms and dads, grandparents without age restrictions.

On December 27, at 8 p.m., the City Theater of Podgorica will mark the Theater Day by performing the play Colonel of Birds (Pukovnik ptica) based on the text by Hristo Bojčev, directed by Marko Manojlović.

Within the literary segment, on December 7 at 8 p.m. on the Secretariat's channels you will be able to follow the promotion of Montenegro in the First World War (1914-1916) - Collection of Documents, prepared by Milan Šćekić and published by the Radosav Ljumović Library. Two promotions of Fokalizator are also scheduled: December 10 at 8 p.m. Zoran Koprivica Vrteška laži and December 22 at 8 p.m. Collected short stories by Milovan Đilas, second part.

The promotion of the book Writers Don't Fall from the Sky - Proceedings of the Forum of Young Writers of KIC "Budo Tomović" will be held on Friday, December 11. The sixth collection of the Forum includes songs and stories that were created mostly during 2020, marked by epidemics and quarantine. Within the Forum of Young Writers, we will present poetry by Barbara Delać (December 14), a book of poems by Nikola Ćorac (December 17) and the first independent book of poetry by Luka Boljević (December 23).

All promotions will be broadcast on the youtube channel and social networks of the Secretariat for Culture and Sports - Podgorica.